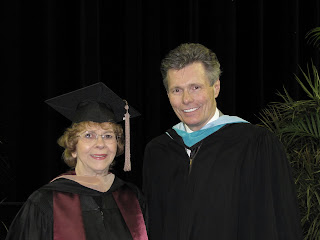 At the age of 65, she graduated from the University of Utah with a bachelor’s degree in psychology and then left Bountiful and moved to St. George, where she found employment at Red Mountain Elementary from 2002 to 2009, and is currently employed at Vista Elementary in Special Education.

It was while attending a women’s conference at the Dixie Center that Larsen discovered the University of Phoenix.  She stopped by their booth, picked up information on their graduate programs, talked to the enrollment advisors, spent the summer thinking about it, and then decided to go for it.

A fully-accredited, non-traditional institution of higher learning founded specifically to help working adults earn degrees, diplomas and certificates in many different career fields, the University of Phoenix makes use of the latest educational technology and flexible scheduling to allow students to pursue their goals with minimal disruption to their daily lives.  The program and approach seemed ideally suited to Larsen’s needs.

Larsen hopes to use her degree to serve others and give back, something she has been doing for much of her adult life.  In addition to teaching Yoga and Tai Chi and helping out at the Ivins police station (where, she tells people, she polishes bullets to make them go faster) she is a member of the Committee for Ivins City Fire Plan and has served an LDS mission to Washington, D.C.  And as if all that weren’t enough, she enjoys spending time with her sixteen grandchildren and two great-grandchildren.

“There’s so much to learn and so much to do,” Larsen says.  “The University of Phoenix has opened doors for me and can do the same for others.  No one needs to slow down just because they hit some number on a calendar.”

About University of Phoenix

University of Phoenix is constantly innovating to help students balance education and life in a rapidly changing world. Through flexible schedules, challenging courses and interactive learning, students achieve personal and career aspirations without putting their lives on hold. As of November 30, 2009, 455,600 students were enrolled at University of Phoenix, the largest private university in North America. University of Phoenix serves a diverse student population, offering associate’s, bachelor’s, master’s, and doctoral degree programs from campuses and learning centers across the U.S. as well as online throughout the world. www.phoenix.edu

ASK TOM: Do I Need an Attorney to Prepare my Estate Planning Documents?
May 29, 2020